A short education on color, infrared and ultraviolet light.

The human eye is not equally sensitive to all colors.  We see color best during the day when we are using the cone sensors in our retinas.  Below is a graph showing how the cone eye sensors are more sensitive at some wavelengths than others.

The eye is most sensitive in the green - yellow portion at around 550nm at night when it is using its rod sensors. 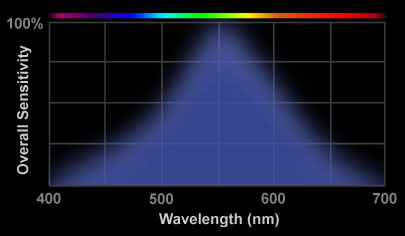 The most common infrared classifications are

However, in astronomy, they sometimes use the same designations to mean:

For astronomers, FIR may mean 300,000 microns for looking at very cold dust in galaxies while for a scientist studying room temperature heat, FIR is around 10 microns.  Obviously, you need to make sure of your definition of terms when using infrared classifications.