To see the monochrome models currently available, you can go our store section by clicking here.

In 2007, we started building machinery to convert a color sensor to a monochrome sensor (or more exactly panchromatic).  By 2009, we had our first successful conversion and have developed a lot of experience since then.  We our on our 3rd generation of processing equipment and have excellent, repeatable, edge-to-edge results on selected sensors.

Why use a monochrome camera?  Because an equivalent monochrome camera will always take a much sharper image than a color camera because resolution is dependent on the color content in the picture.  With a monochrome camera, you lose color resolution and gain spatial resolution.  Converting a color sensor to monochrome is a technically challenging process.  After taking the camera apart to remove the image sensor, we have to remove the ICF/AA stack, sensor coverglass and then about 5 microns of the microlenses and Color Filter Array (CFA) that have been photolithography printed on the surface of the sensor in epoxy.

To understand why a monochrome sensor will have higher resolution that a color sensor, you have to understand how a color camera sensor works.  We have a rather technical explanation for those so inclined.  For the artistic types that aren't interested in the science, please just consider the two pictures below. 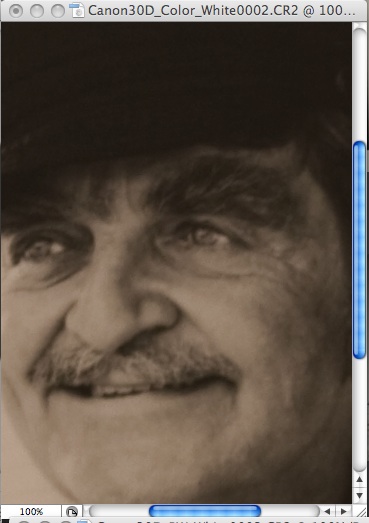 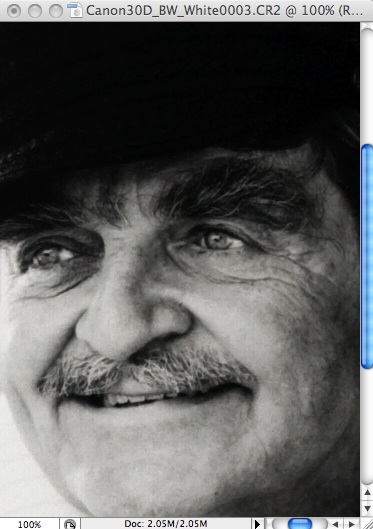 Which picture looks better to you?  These pictures are an area of a larger picture zoomed to 100% in Photoshop..

Some history.  Kodak made a series of monochrome DSLR cameras starting with the DCS-420m (1.2 megapixel), DCS-460m (6 megapixel) and lastly the DCS-760m (improved 6 megapixel).  The DCS-760M sold for $10,000.00 in 2001.  Unfortunately, the market for B/W DSLR cameras is quite small and Kodak discontinued the line.  Today, Kodak has discontinued all DLSR cameras and the company is a small fraction of the size it once was.  Some medium format monochrome data backs are available, and they are quite expensive.

A camera sensor is composed on many different layers.  From the top, the first layers are: 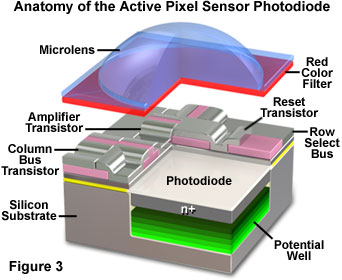 Pixels are arranged usually in a Bayer Red-Green-Blue-Green pattern  Green is used twice as much as red and blue in an effort to more closely mimic the human eye which sees green better than red or blue.  Humans see green the best of any color. 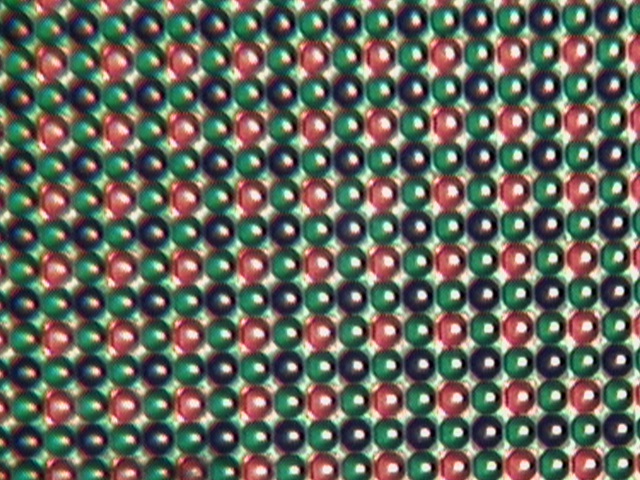 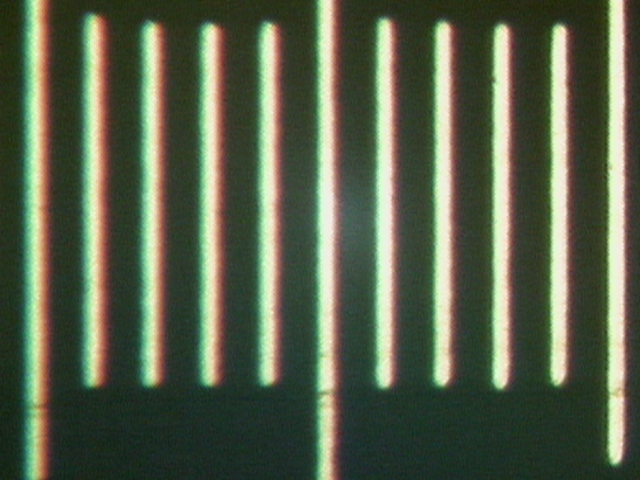 For size comparison, the lines above are 0.01mm apart

Canon 7D MK II stock and after converting it to monochrome 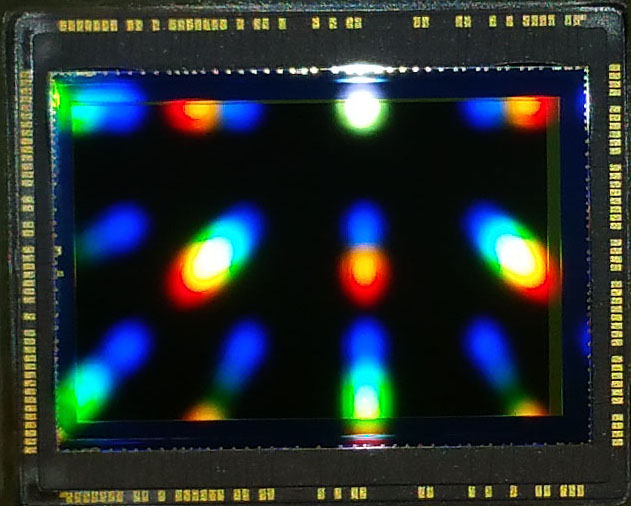 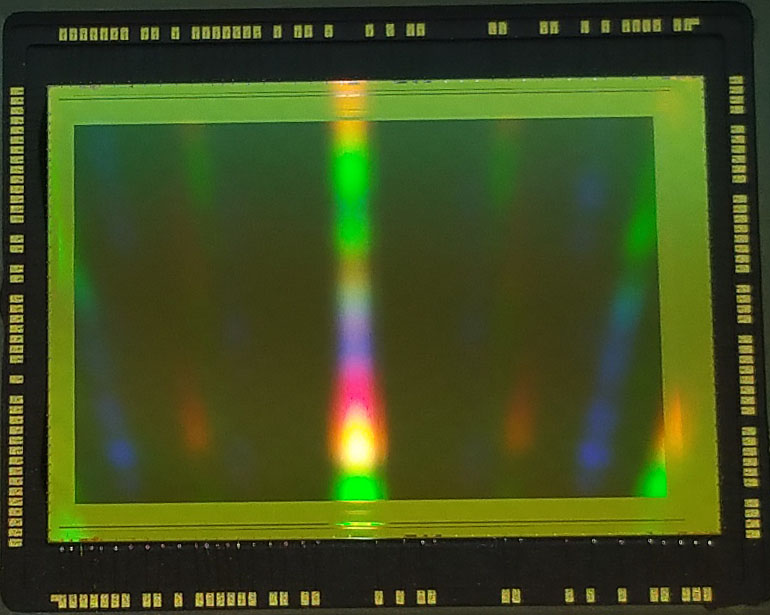 Fuji X-Pro1 stock and after converting to monochrome 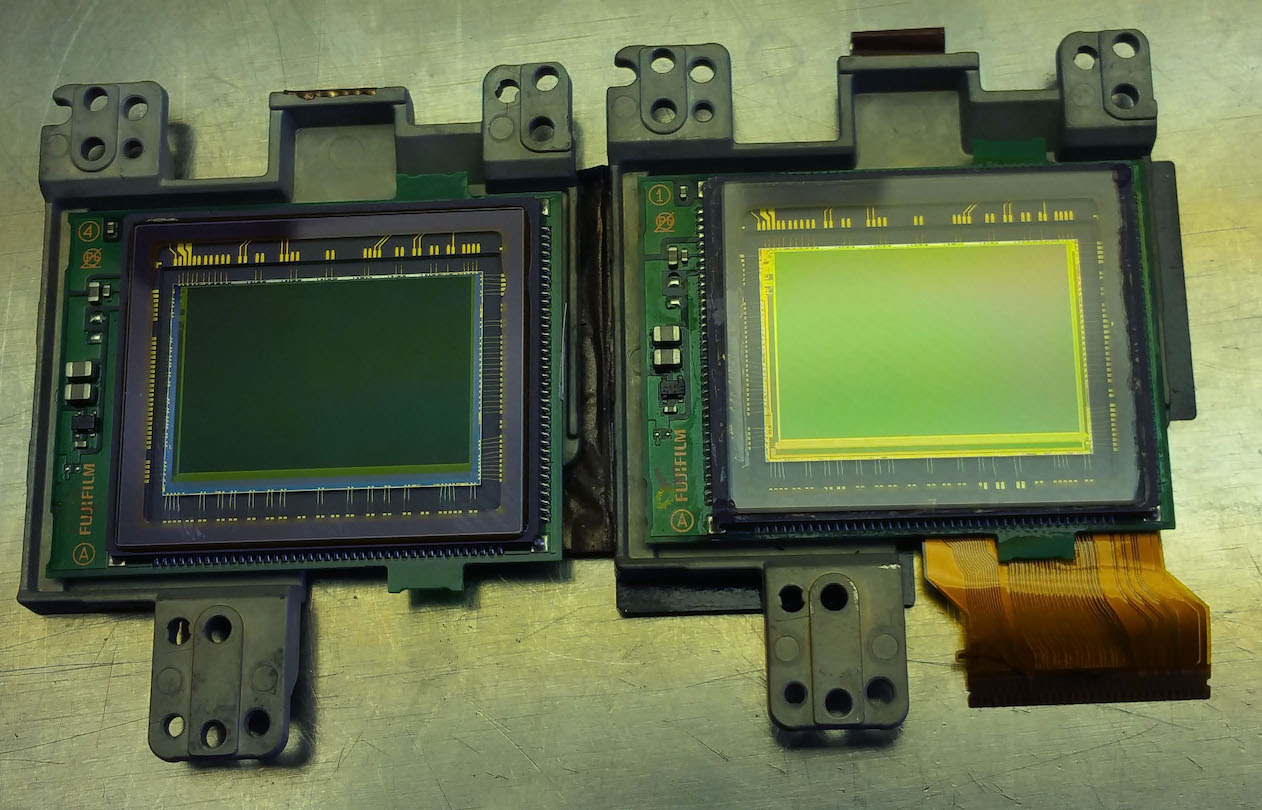 The color content of the picture will change a color camera's resolution.  This is why a red rose sometimes looks blurry in comparison to other parts of a picture.  The red rose is only triggering 1/4 of the pixels.

To test our theory, we performed the following test.

First we will show the MTF of the two cameras.  The monochrome camera is the left column.  For those who would like to understand more about MTF, Luminous Landscapes has a good discussion here.  Basically, MTF is a mathematical way to quantify lens and camera sharpness.  One can easily look at a picture and see that one is sharper than the other, but the question is "How much"?  MTF allows us to put numbers to what we can see.

The further the MTF goes to the right and the higher it is, the sharper the picture.  There are four MTF graphs for each camera. The first shows white light sharpness.  Next is green, then blue and lastly red.  The blue light was the weakest light, so the blue MTF showed the worst performance from both cameras.  You can see that the B/W camera has much higher performance.  At 0.2 cycles/pixel, the monochrome camera has twice the sharpness and at 0.30 cycles, has 5x the sharpness. 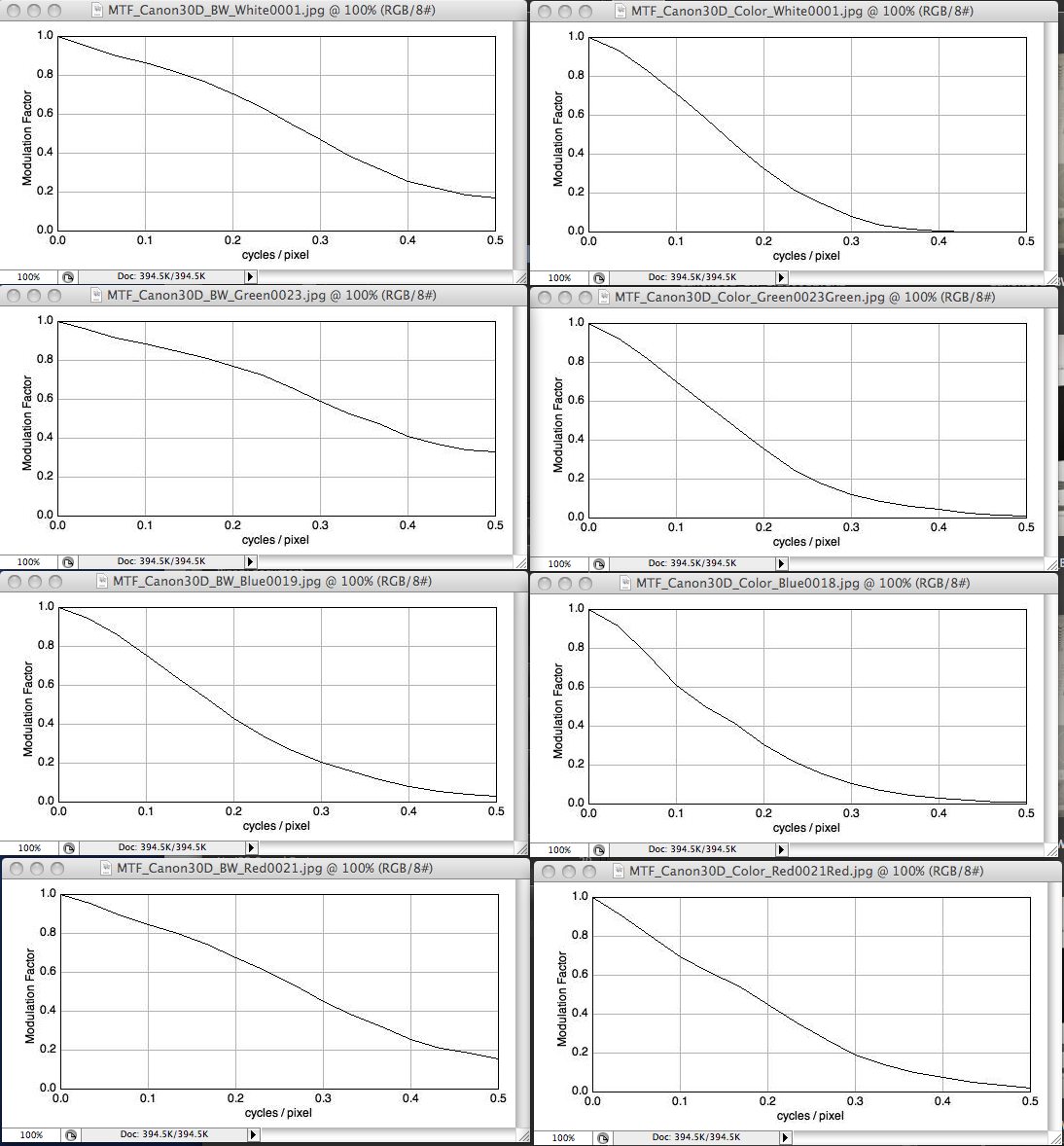 You can see that in every case, the monochrome camera substantially outperforms the color, stock version.

Real life performance.  The titles of the different pictures will tell you about the particular test.  First, we show the color camera taking the same picture under green, blue, red and white light.  Note that the green picture has the highest resolution because there are twice as many green pixels compared to red or blue.  Notice that the blue picture shows the highest noise which may relate to the blue light being dimmest and/or the response of the sensor to blue light.  Notice the difference between the color and monochrome cameras. 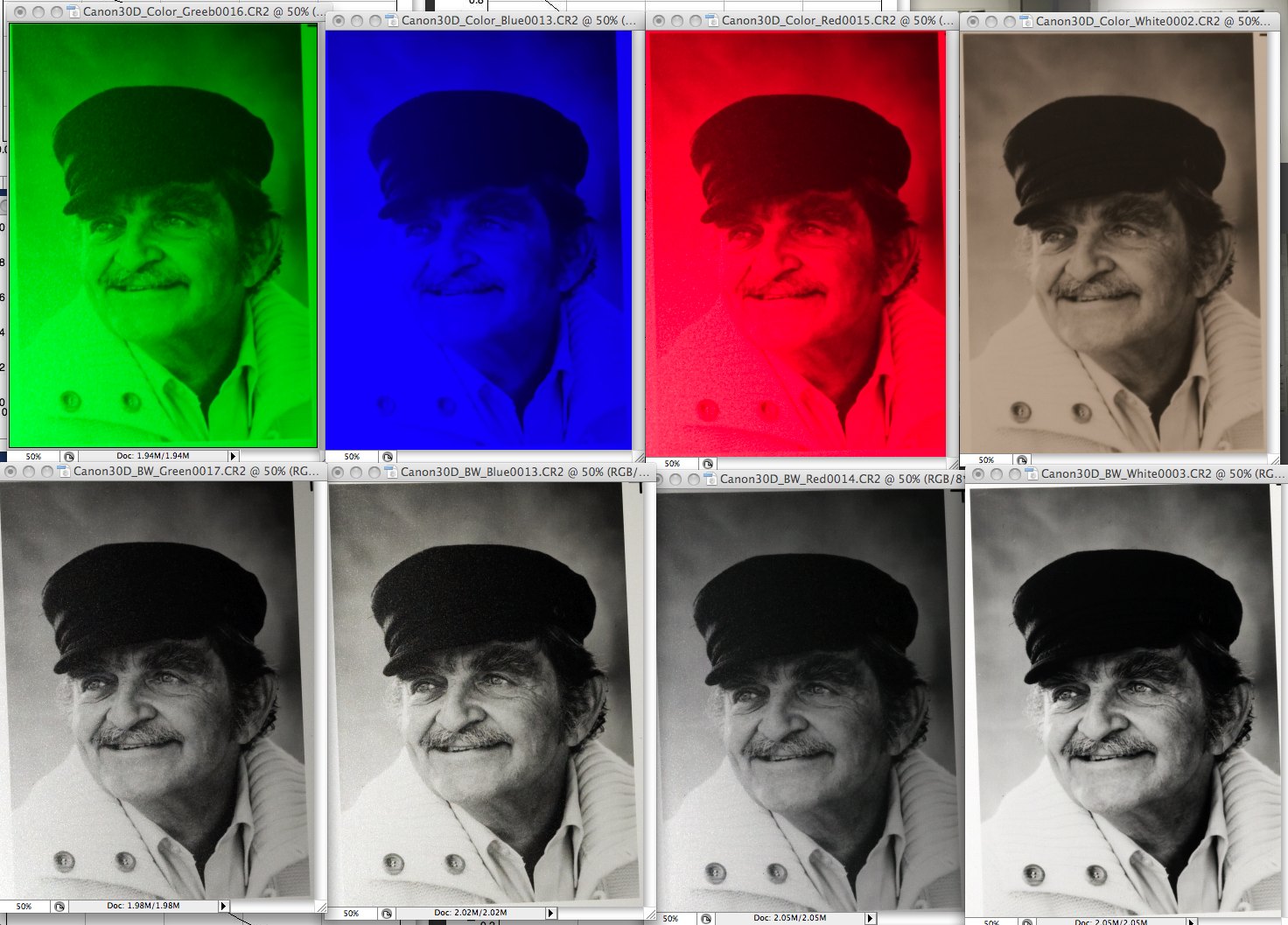 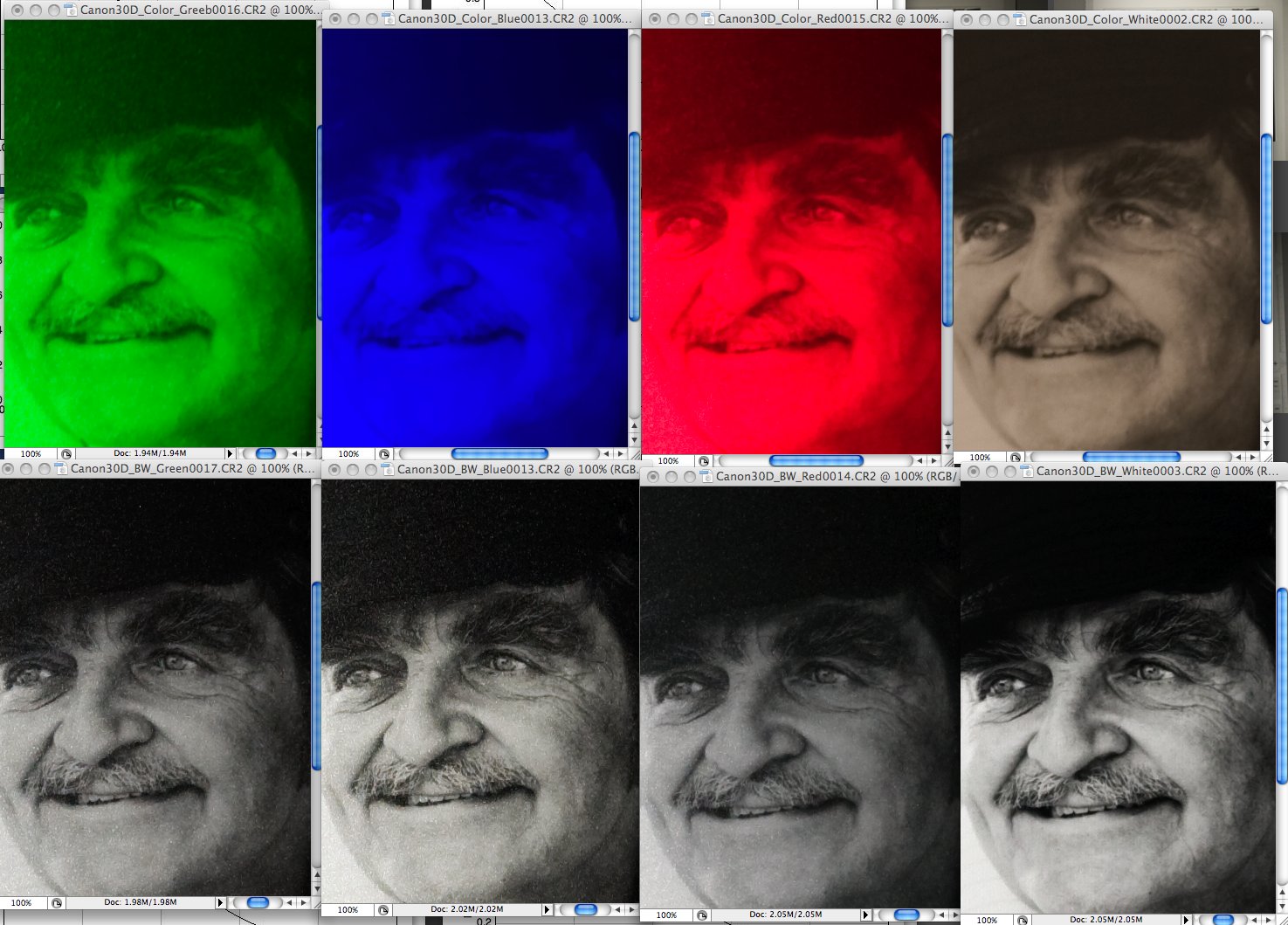 That's why a monochrome sensor has an advantage over a color camera when taking black and white pictures.